Recommendation with Preface of „The Border Within: Vietnamese Migrants Transforming Ethnic Nationalism in Berlin“

Preface to The Border Within: Vietnamese Migrants Transforming Ethnic Nationalism in Berlin

VLab Berlin is happy to recommend „The Border Within. Vietnamese Migrants Transforming Ethnic Nationalism in Berlin“ by Phi Hong Su.
And what’s more, we have permission to let you take a first look at the preface right here and now:

The Vietnamese language was the last thing my sister, Phung, and I expected to miss during our high school study abroad in Germany. Like other children of working-class immigrants and refugees in our Southern California suburb, my sister and I spoke elementary Vietnamese at home. We translated as best we could for our monolingual parents at medical and welfare offices. In fact, we associated our heritage language with this burden of cultural brokering. But the German language and our brief study abroad offered something entirely different. Our stay with our host families in the town of Gummersbach allowed us to peer into an alternate upbringing, where members of a household and community communicated fluently in the same tongue. Parents could navigate the society in which they lived and therefore trusted their children to attend parties and walk around at night without fear of an unknown milieu. At fifteen, I saw the German and Vietnamese languages as representing forking paths: expanding versus constricting horizons, freedom versus captivity. 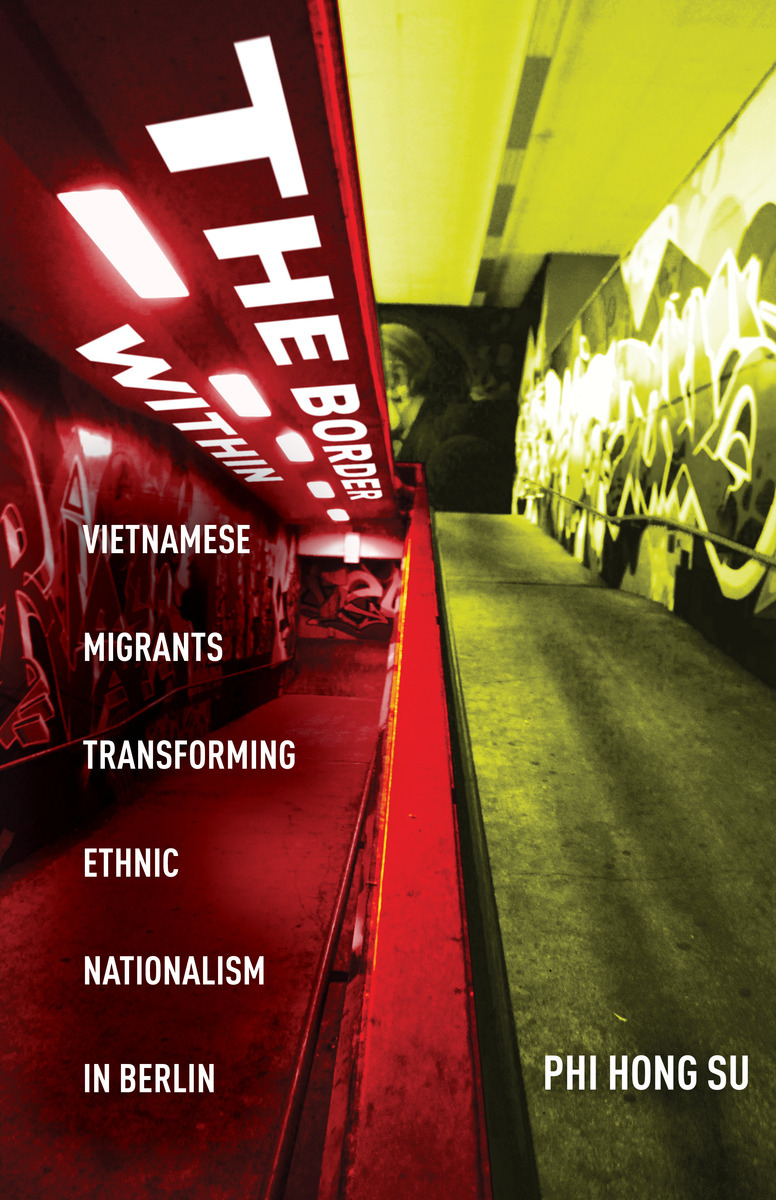 But after two weeks of speaking only English or faltering German with our host families, something odd happened. Strolling down the street on a day trip to Bonn, my sister and I paused at the sound of that familiar yet unexpected language, dancing with its six tones. Our eyes hunted for the source: an Asian woman clad in a thick autumn jacket, calling after a child who was scuttling about on the cobblestone streets. Phung eagerly accosted the woman to ask, “Auntie, are you Vietnamese?”[i] The woman’s affirmative response and our brief exchange have been blurred by the intervening seventeen years since. My sister insists I quipped something to the effect of, “We’re in Europe, and the first thing you get excited about is talking Vietnamese?” This snapshot surges back when I think of how people “perceive their national identities as real, tangible and meaningful pillars of [their] selfhood.”[ii]

I unwittingly carried this interest in ethnic nationhood with me into undergraduate studies, when my keenness to soak up Marx alarmed my father, a former officer in the Army of the Republic of (South) Vietnam. After the communist victory over the South in 1975, he languished for eight years in so-called reeducation camp—a political prison. My strangely charged conversation with my father echoed yet another thread of Cold War politics I saw bubbling within a presumably unified “ethnic community.” In 2009, Vietnamese Americans became incensed by an art exhibit hosted by the Vietnamese American Arts and Letters Association (VAALA) in Little Saigon, California. Demonstrators vandalized and successfully shut down the art exhibit that had included a photograph of a woman donning the Vietnamese flag and sitting next to a bust of communist leader Hồ Chí Minh. Never mind that the artist intended his work as commentary on the ironic commodification of communism in postwar Vietnam.[iii] In the following years, I came to organize with and study VAALA members. I heard at length about how the art exhibit curators endured threats of violence as well as verbal and physical attacks during the protests.

But although the protesters identified themselves as anticommunist, the Vietnamese coethnics who were the object of their scorn did not correspondingly identify as communist. Many VAALA members were, like the protesters, refugees or the children of refugees, critical of the Vietnamese government. Yet fear of provoking anti-communists and of disrespecting “our elders” nevertheless informed how we went about organizing an upcoming film festival. The prospect of anticommunist protests presented itself everywhere, though self-identified communists were nowhere to be found.

In time, I came to see migrant anticommunism as revealing a more universal truth: that state formation in a homeland, and subsequent emigration out of it, transform ethnonational identities in durable ways. Like Cubans and other Cold War migrants to the United States, Vietnamese Americans intuited that certain images, references, and ideologies were simply unacceptable. The 1.5- and second-generation VAALA organizers like me discerned these often implicit rubrics even though few of us had ever spoken with our parents about the war. Instead, we learned these lessons through strained conversations—conversations about reading Marx as sociology majors or wanting to visit Vietnam. We learned through subconsciously mirroring the frowns on other people’s faces as they discussed their fears of anticommunist backlash. We learned through organizing in a community that voiced its displeasure fervently, a community whose first wave of refugees decades earlier were the political and economic ethnic elites. It was they who set the tone for what we considered legitimate expressions of cultural identity. We learned in a national context that saw refugee flight as a way of recuperating American identity after a devastating military defeat in Vietnam.[iv] But the United States is not the only country where we see contestations about what it means to be Vietnamese; we also find examples in France, Canada, and Australia in ways related to how each country received refugees.

But what about countries where Vietnamese border crossers were not primarily refugees? This question corresponded serendipitously with my continuing interest in Germany and the German language. I had been practicing German with online tools through the Deutsche Welle, a public broadcasting company, when I stumbled across a piece by Sebastian Schubert aptly titled “Berlin’s Vietnamese Wall.” “The German capital is home to thousands of Vietnamese,” the subheading read. “But the communities in the East and those in the West remain divided, even 15 years after the fall of the Berlin Wall.”[v] Sure enough, everyday Vietnamese people echoed this refrain when I began to conduct fieldwork in Berlin in summer 2013. On hearing about my interest in studying Vietnamese border crossers in Germany, nonprofit workers, grocery store cashiers, restaurant servers, and Buddhist lay worshippers alike emphasized that unlike elsewhere in the diaspora, Berlin and Germany had not one but two Vietnamese communities—and they did not get along.

The following pages unpack this pervasive sentiment that Vietnamese border crossers in Germany remain divided along Cold War lines. Lan, a woman from southern Vietnam who migrated to West Germany through family reunification for refugees, captured this attitude: “I look at Germans and I feel that they’re so lucky. Why were they able to heal like that [after reunification] when we haven’t?” (Chị nhìn người Đức rồi chị cảm thấy họ may mắn quá. Tại sao họ có thể chửa lành như vậy khi mình chưa làm được?).

Yet Germany’s Cold War history structured lingering perceptions not only of the Vietnamese border crossers who lived on both sides of the iron curtain, but of native Germans as well. In fact, Germans still stereotype what they see as intractable differences between east and west. For people socialized in pre-reunification Germany, “more than 40 years of dual state structures has indeed contributed to the construction of two different nations,”[vi] diverging in social, economic, and political histories. By contrast, Lan assumes that nations should converge when states do—that reunification should likewise have reunified people who share an ethnonational identity. This logic has echoes in journalism and scholarship that continue to report on and wonder about persisting divisions among Germans.[vii]

On the one hand, this expectation that Cold War compatriots should have reunified when their divided countries did reveals the enduring power of ethnonational thinking. Even if we know that traditions are invented and national myths constructed,[viii] scholars recognize that people often experience the ethnic nation as an indisputable core of their identities. This book therefore takes seriously how everyday migrants, thousands of miles away from the place many still call home, make sense of their social, cultural, and religious lives as ethnic Vietnamese.

On the other hand, enduring conflicts between former North and South Vietnamese, East and West Germans illuminate how border crossings can quickly alter ethnic nationhood and nationalism. These Cold War compatriots understand themselves to be nations divided by states, but the undoing of physical borders did not similarly undo social ones. Thus, this book at once acknowledges how fervently people experience ethnic nationhood while also speaking broadly to how border crossings disrupt and transform existing social identities and relations. The following pages unpack this central insight: that border crossings transform ethnic nationhood and nationalism in consequential, enduring ways.

About the author: Phi Hong Su is a Visiting Assistant Professor of Sociology at Williams College. Previously, she was a Postdoctoral Research Associate in the Division of Social Science at New York University Abu Dhabi. Check out her website to find out more at: http://www.phihongsu.com/

In Germany, the book is available for pre-order through Lehmanns and Amazon.

[i] In Vietnamese, pronouns such as I and you take on kinship terms that signal gender and relative age.